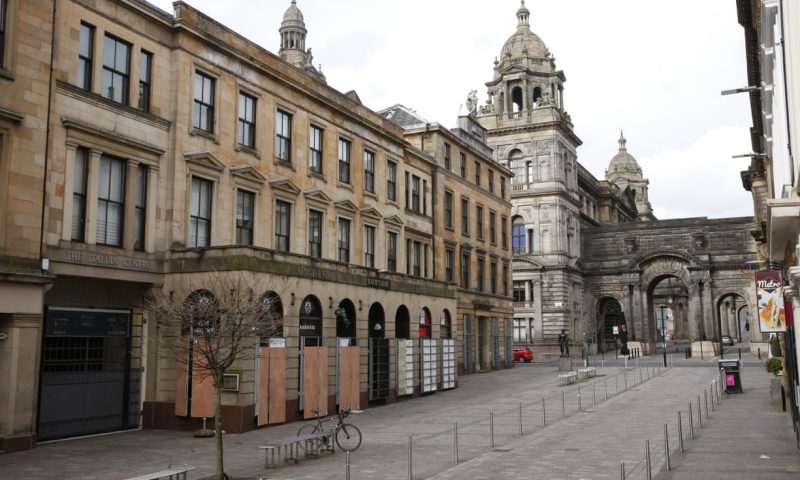 A deserted Glasgow after the coronavirus lockdown. Asylum seekers, moved to hotels in the city centre, say their situation is ‘almost like prison’
Spread This News

Hundreds of asylum seekers in Glasgow have been given less than an hour’s notice to pack up their flats before being moved into city centre hotels, where they claim social distancing is “impossible”.

They have also had all financial support withdrawn, apparently because the hotels provide three meals a day, basic toiletries and a laundry service, in a move condemned by campaigners.

The Guardian understands that the private housing provider Mears, which is subcontracted by the Home Office, has moved more than 300 people from mainly self-contained apartments into hotels over the past 10 days.

Although this group is made up mainly of single men, it includes a family with a young toddler, people assessed as potential survivors of trafficking, and a heavily pregnant woman, the Guardian believes.

Mears insists that people are being “safely and appropriately” housed, in accordance with health authority guidance.

A Home Office spokesperson said it was “totally incorrect” to suggest that there were problems with social distancing, adding: “We are only moving asylum seekers where it is necessary, strictly following guidance from public health authorities, and into accommodation that ensures social distancing. This is to help stop the spread of the virus, protect the NHS and save lives.”

But the Guardian has spoken to a number of those who were moved suddenly, on condition of anonymity, as well as outreach workers who say they have significant concerns. They describe their situation as “almost like prison”, with strictly enforced meal collection times and no access to food or drink other than water outside those hours, and some say they cannot open their bedroom windows.

One man, S, said he was given 30 minutes to pack up the flat where he had been living since he arrived in Scotland from Saudi Arabia five months ago. “They didn’t give me any information, but said it was on the orders of the Home Office. Nobody knows how long we will be here.”

Guardian Today: the headlines, the analysis, the debate – sent direct to you
Read more
He added: “Everyone here is feeling bad, and worried about the virus. There is no social distancing in the meals area and all the food is uncovered. I would like to buy some juice or fruit for my room but they told me my [Home Office issued] card won’t work any more.”

Another, M, said: “It’s impossible not to get close to people when you’re in the lift or getting your food, and there are two bottles of hand sanitiser among 80 people. There are many Muslims here and Ramadan begins in two days. The evening meal stops at 8pm, so what happens when we start fasting?”

While outreach workers say Mears has promised to make arrangements for those fasting, and to provide prayer mats, none of the asylum seekers to whom the Guardian spoke had been told this.

Although the hotels have wifi, support workers point out that without cash, people cannot top up their phones to continue communication with lawyers, or buy extra food or hand sanitiser.

Gary Christie, the head of policy at the Scottish Refugee Council, said: “People tell us they’ve been moved into hotels at very short notice and without a proper explanation of why they’re being moved, how long for, or what will happen next. It’s confusing and frightening and raises serious concerns about how the Home Office communicates and shares vital information.

“People can’t stay in hotels forever. We need to know how the Home Office plans to accommodate people when lockdown restrictions ease, so charities, local authorities and other partners can support any further moves. We’re also really concerned that people in hotels are not receiving cash support that’s needed for phone top-ups and other essentials.”

The vast majority of those moved are either new arrivals, some of whom have been in the system for months awaiting decisions on their substantive asylum claim, or those who cannot return to their county of origin because of the pandemic. They were previously receiving financial support either in cash or through a payment card.

They said: “Therefore we had no alternative but to procure hotel space where we can safely and appropriately house and support each person with food and health services without restriction on time of residence.

“All movement of the people concerned was undertaken in accordance with health authority guidance on social distancing and use of PPE. The safety and wellbeing of each person is paramount and Mears are working hard to ensure we meet all obligations at this very difficult time.”

The Home Office said that accommodation would be reviewed “prior to the end of June”.