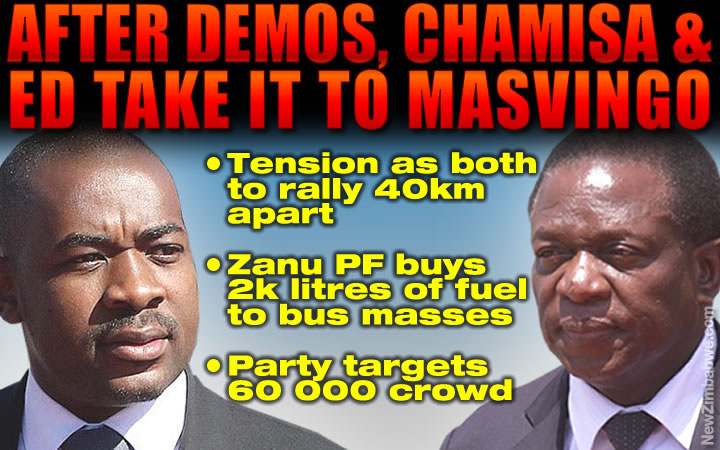 TENSION is high in Masvingo where both MDC Alliance and Zanu PF members are working hard in preparation for their leaders who are expected to address crowds 40 km apart from each other Friday.

President Emmmerson Mnangagwa is expected to tour the now defunct Shabanie Mashava Mines and the Cold Storage Company (CSC) before winding his visit with a rally at Mucheke stadium in Masvingo.

The ruling party is targeting an  ambitious  60 000  strong crowd  who are expected to attend the rally amid fears that the number might be too big to meet as MDC alliance presidential candidate, Nelson Chamisa will also be in rural Masvingo on the same day.

Chamisa will be addressing a rally at Machakata Business Centre some 40km out of Masvingo city, before ending his tour of the province in Chiredzi on Saturday.

This comes a few days after both parties held rallies in Harare for electoral reforms and peace ahead of the July polls. Thousands turned up for the MDC-Alliance march on Tuesday in what many thought was the biggest demonstration since the coup last November. This was followed by a Zanu PF peace march on Wednesday in which a smaller crowd turned up.

In Masvingo, Zanu PF recently held an emergency Provincial Coordinating Committee (PCC) meeting were the executive members endorsed the strategy of bussing people in order to boost numbers on the day of the rally.

“As a province we don’t want to be ashamed so we are targeting to have at least 60 000 people who will be bussed from all corners of the province to come and hear what our presidential candidate has to say.

“All is on course and so far we have managed to secure over 2 000 litres of fuel to bus people for the rally although more donations are still coming.

“Party regalia will be there for everyone,” Chadzamira said.

On Tuesday, Chamisa addressed the biggest crowd since the coup as the MDC Alliance supporters and members marched through Harare for electoral reforms.