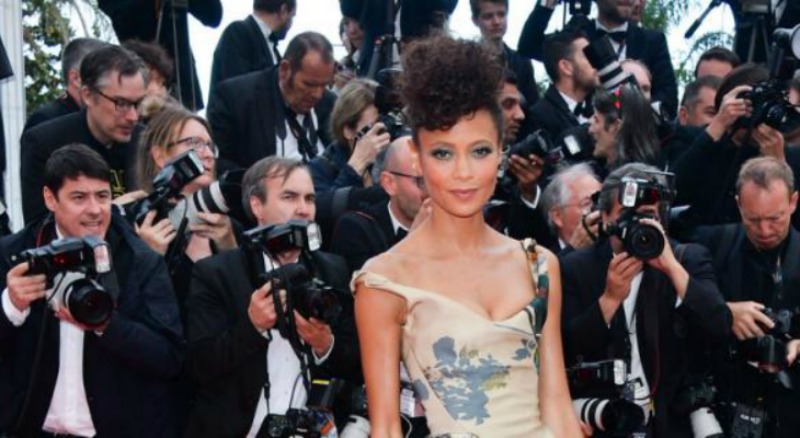 THANDIE NEWTON arrived to the red carpet of the premiere of Solo: A Star Wars Story in Cannes wearing a custom gown designed by Vivienne Westwood–featuring imagery of all the black characters to ever appear in the Star Wars series.

Rather than state the obvious in her carpet interviews–that this Star Wars film portrays the largest number of black characters to date–the actress preferred to wear her opinions on her sleeve–or rather, her skirt.

Samuel L. Jackson is also pictured as Mace Windu, whom he plays in the prequels. His character was depicted holding his signature purple lightsaber, an accessory which was reportedly a demand of Jackson’s while filming.

Per Newton’s affinity for futuristic-meets-Western films (she also stars in Westworld), Solo: A Star Wars Story is a western-inspired space heist film following a young Han Solo as he becomes the lovable smuggler we all knew him to be.

Thandie’s character, Val, is a new addition to the plot (we think) and her gown was a welcome addition to the premiere’s red carpet. The gown is likely pointed at the cast’s note that their crew marks the largest contingent of “black people in the galaxy.”

On his recent appearance on Saturday Night Live, Glover joked about the lack of diversity in the Star Wars franchise, in a sketch about the release of the new movie.

It’s also important to note that Lupita Nyong’o’s character, Maz Kanata, is not shown on Newton’s gown–but we’re thinking it’s because in the film, her character was transformed into a wrinkly alien creature, who is not portrayed as black.

This killer Cannes appearance had us feeling similarly about both diversity in casting and Thandie Newton’s fashion choices–we need much more of both moving forward.