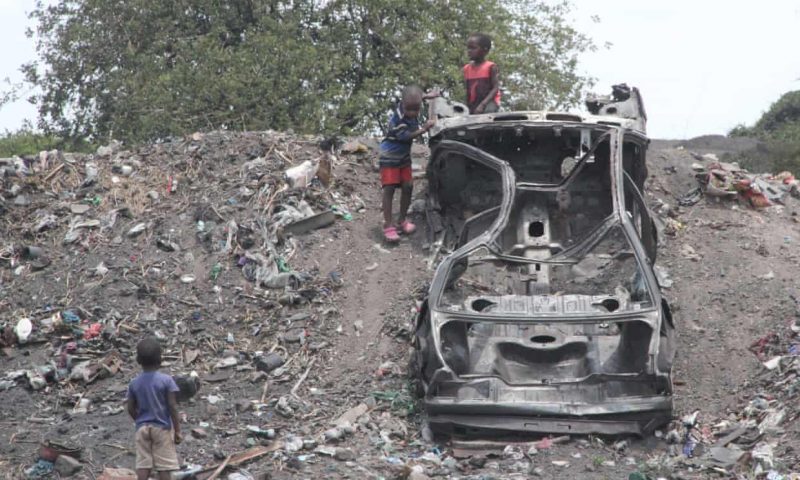 ALISHA Muzvite was out playing when she was caught short and went behind a bush to go to the toilet.

But as the eight-year-old crouched down, the ground beneath her shifted, pulling her into one of the underground fires which burn all around her home in Hwange in north-west Zimbabwe.

An aunt pulled her to safety, but Alisha’s legs were so badly burned that they had to be amputated. More than a month after the accident, the little girl died of her injuries.

“It is painful what has befallen us,” says Andy Muzvite, Alisha’s father.

With only one public toilet for more than 500 people living at Number 3 settlement, a housing area for Hwange Colliery Company employees, bushy areas have become convenient for open defecation.

But, impossible to see on the surface, coal has been burning under the earth here for years, injuring unsuspecting people, often children.

According to Global Forest Watch, coal seam fires, which happen when a layer of coal ignites, are hard to detect and even harder to extinguish.

There are thousands of them burning around the world in coal-mining countries, estimated to cause 40 tonnes of mercury to enter the atmosphere each year and representing 3% of the world’s annual CO2 emissions.

Before Alisha’s death, the Hwange Colliery Company workers had sacrificed the little they had to help with her medical bills.

“Her mother went door to door asking for whatever amount. She struggled to get money for her medical bills. That woman suffered,” says Anita Muyere, 32, a neighbour.

“The entire community is in shock after the death of Alisha. We have become more careful with our children. Anything can happen now, and it is very unfortunate that it only takes a fence to avoid these accidents,” she says.

“The president should come here and see the danger that our children are facing. They should force the colliery to act,” she adds.

About 500 metres from the Muzvite’s family home, Preside Sibanda, 16, is lucky to be alive after he was almost swallowed by the underground fires.

Preside was playing with his friends when he stepped on to a heap of coal, already burning underground.

“He was looking for mango and was burnt on both legs. He survived by holding on to a tree. Otherwise, the fire could have swallowed him,” says Clement Dube, his stepfather.

“He is now OK, but the heat burns are still troubling him. He is always scratching his legs. He even stopped going to school because of that, because his friends always laugh at him. He cannot even wear his school shoes. Whenever he stands, water comes out of burnt wounds,” he adds.

“The company did not help us at all. They never sent a representative to visit us. We thought they would help but we got nothing. There are no barricades near these places,” says Dube.

His mother, Future Mwembe, also laments the lack of care from the authorities.

“When my son was burnt, I was pregnant. I would walk for hours just to see him in hospital. I suffered because he spent a month in the hospital. We had no money, so he had to return home,” Mwembe says.

Parents here have called on the authorities to fence off the bushy areas, which are near a school, saying the underground fires have been burning for years.

“That place is not just near playing areas for children, but there is also a school which is more dangerous. They should just seal off that place. This is not a recent phenomenon; these fires have been troublesome since I was young. People used to get burnt then. Why are they not barricading the place?” asks Dube.

The blistering sun beats mercilessly on Hwange and suffocating heat emanates from huge piles of dumped coal, filling the air with choking humidity. Zondiwe Dube, no relation to Clement, lives in the Number 2 settlement.

Her son, Obedient, 20, is disabled after he was burnt by underground fires when he was 13.

“My son was burnt on both legs, but the left one severely … He got some help, but it was not enough. I was told to buy plastic, salt and vinegar. The plastic worked as a bandage; the experts say it removed the heat trapped inside the leg,” says Dube.

“He stayed in the hospital for over three months, but he recovered soon after because of the prayers.” She says Hwange Colliery Company did not help with medical care.

“The company did not show us love. I used to walk in the wee hours of the morning [to visit Obedient in hospital]. I really suffered taking care of my son. There was a day I woke up at 3am on a road notorious for marauding elephants,” Dube says.

Dube’s husband says there should be mechanisms to fight the fires.

“This area is not safe; the company should put a fence because these signposts are unreadable. These fires are moving in the roads. The colliery should put its community first. It is not just my child, but many others. Even people’s cattle are being roasted by the fires,” he says.

“Some of the victims who are now adults were injured while young and had their future ruined by the permanent injuries, lengthy periods spent in hospitals and unending excruciating pain that has become a permanent experience in their lives, largely due to inadequate therapy they received,” reads the report.

“Dangerous sites must be properly secured to ensure children do not gain access. In places with underground fires such as Hwange, the company, and the Environmental Management Agency have a duty to keep watch over these fires and warn the community accordingly,” CNRG says.

“People are trespassing to those areas which have clear signs. We have thousands of hectares in concessions and have sealed off the dangerous areas, but people steal the fence,” Mutombe says.

“Do you know coal has spontaneous fires and we will need to seal off every square metre?”

Mutombe says the company bought a drone to locate fires and that awareness campaigns are already under way in the community, but that it will not compensate those injured. The company, however, says it did assist the Muzvite family with medical bills after Alisha’s death.

Daniel Molokeli, MP for Hwange, says he wants a solution.

“We have called for an all stakeholders meeting with the Hwange Colliery Company to agree on a permanent solution. We also want to work together to raise awareness. We are concerned about the number of cases of people getting burnt and some dying,” Molokeli says.