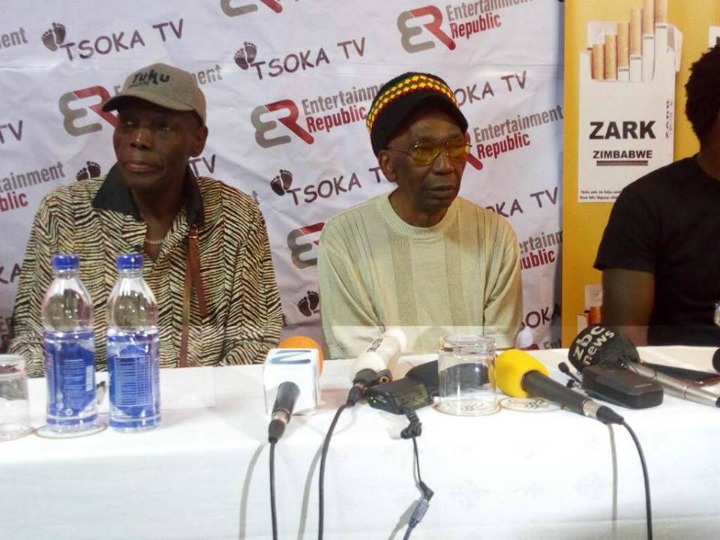 LEGENDARY musicians Thomas Mapfumo and Oliver Mtukudzi have dismissed speculation that for years there has beef and bad blood between them.

The two who started their musical careers in the 70s said there is no genuine feud between them adding that the cold war was a started by their followers.

Addressing their first ever press conference together in Harare recently and answering the question who was the greatest between them, both Mukanya and Tuku said music is not a sporting game where in every game winner is expected.

“This is not the most important thing to ask who is better than the other; this is the most useless question to ask,” Chimurenga music legend Mapfumo laughed off the question.

“I have won global awards so as Tuku but should we go around saying I am the best and greatest Zimbabwean musician and that I am better than Oliver?”

Mukanya added, “He sings his own genre; I sing mine, Jah Prayzah has his own style, even some upcoming musicians have their own style. So we are all different and we are not in any musical competition, music is different from soccer.”

“That why you have seen musicians having some collaborations, please stop diving us.”

Responding to the same question, Tuku said there has never been any beef between them but this could have been started by their fans.

“Those that follow Mukanya or myself debate among themselves who is better between the two of us,” Tuku told journalists.

“But if you as ask them where the competition is, they won’t tell you.”

He added, “But to tell you the truth, Mukanya is blessed in his own right, he has gifts from his ancestors and by expressing his musical talent he is not doing it to win over other musicians.”

“So it is the same with me, but together as musicians we can entertain you.”

Mukanya and Tuku are expected to share the stage on the 28th of April at the Glamis Arena in Harare at what has been dubbed ‘The Big Bira’.