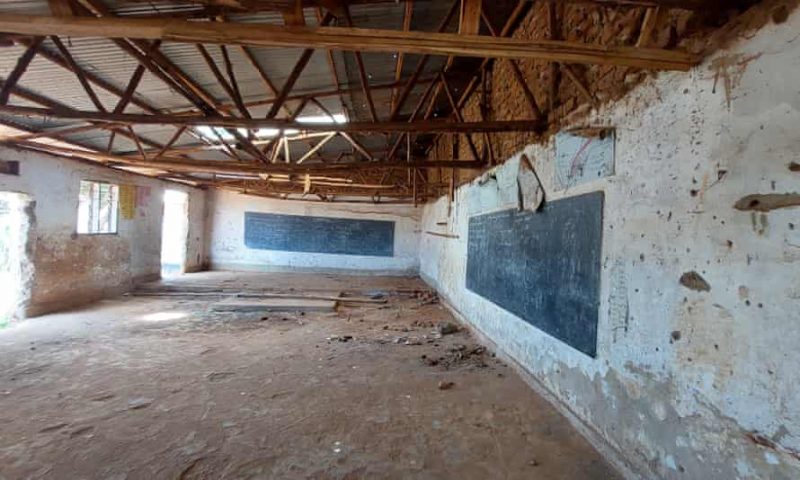 An abandoned classroom in Uganda, where many teachers were left with little or no income when schools shut.
Spread This News

THE last message Mary Namitala received from the private school in which she taught was in March last year, the day all schools in Uganda were ordered close due to Covid-19.

The message read: “No more payments until when schools open.”

“My husband and I decided to leave our rented house in town and shifted to the village, to our unfinished house. We could not afford to continue paying rent,” says Namitala, from her home in Bombo in central Uganda, about 20 miles north of the capital Kampala.

She had no choice but to find other sources of income.

“I have transitioned from teaching into farming and there’s a ready market for our produce,” she says, pointing to rows of tomato plants in her garden, and the chickens she is breeding. She has even rented an extra plot of land to grow more crops.

“I will not leave my business, which I started, to devote all my time to teach again,” she says, adding that other former colleagues have done the same.

About 40% of Uganda’s primary schools and 60% of its secondaries are private institutions, run by individuals, religious organisations, charities and businesses, with no help from the local authorities.

Some private schools offer a high-quality education and good facilities, some are started as business ventures, purely to make money for the owners.

But many others are opened and funded by families or villages in areas where government schools are overcrowded or too far away.

When schools closed, parents stopped paying, income dried up and most schools had to reduce or stop paying teachers’ salaries.

The government continued to pay the wages of state school teachers, but its promises to assist private teachers have gone unfulfilled.

The Economic Policy Research Centre, a think tank in Kampala, reported in May that 85% of private schools were not paying full teacher salaries due to financial challenges brought on by Covid-19.

Across sub-Saharan Africa, 50% of private school teachers (15% of the total number of teachers) saw a drop of 50% in salaries on average.

Like Namitala, many teachers in Uganda have found new careers, which threaten the future of private schools. Hundreds are being put up for sale due to pressures from banks to repay loans and disinterest from owners to reopen.

Robert Kimenya, headteacher at Green Galaxy nursery and primary school, near Kampala, says many of his teachers left because of Covid closures.

“I have two teachers who have joined the army. Some have relocated to their villages. That means when we open, some schools will not get teachers, including government schools.”

George Wakirwaine, 30, a teacher for seven years at a community school in Kampala, could not afford to keep his wife and two daughters in the city when his wages dried up.

He sent them to his family’s village. His survival has largely depended on the goodwill of the parents whose children he taught. He also fetches water for homes in the neighbourhood for a small fee.

“I am looking for other ways to survive. It makes me sad that I have to leave this profession,” he says.

Some teachers have no plans to return to the profession.

“I will never go back [to teaching],” says one former teacher, who now runs a tailoring shop in Kampala.

Another, who is also running a shop, says: “It’s not worth it. First, there is no money, and when you find yourself in such a situation [long closures], no help whatsoever.”

Nicholas Bwire, who leads the Mukono Private Teachers Association, a loose association of up to 500 private school teachers in Mukono district near Kampala, says: “It reached a point where teachers started begging parents to give them something to eat. They now call us beggars who go to them to beg what to eat.”

Racheal Namugaya, 30, a teacher at Global junior school in central Uganda, says she will not leave teaching, but she will keep her fresh food market stall running when schools reopen, as a cushion against future closures.

She is among the lucky ones. Although her salary stopped, the school still provides her accommodation and occasionally food.

But it is the market stall that has supported her.

“I get what to eat, feed my child and provide medication, in case she is sick,” the mother of one says. “I got a loan from friends to start off. They trusted me. I have paid off the loan. The business is doing well.

“I will not close [my business] when schools open. I will get someone to help, but keep very much involved.”

For now, there is little chance of schools reopening, despite appeals from teachers’ unions and UNICEF.

The government is insisting teachers are vaccinated before returning to work. More than 80% of teachers have yet to receive their first dose.

The government confirmed last week that schools will remain closed until January, continuing the disruption to education for 15 million children across the country. Universities are expected to reopen in November.