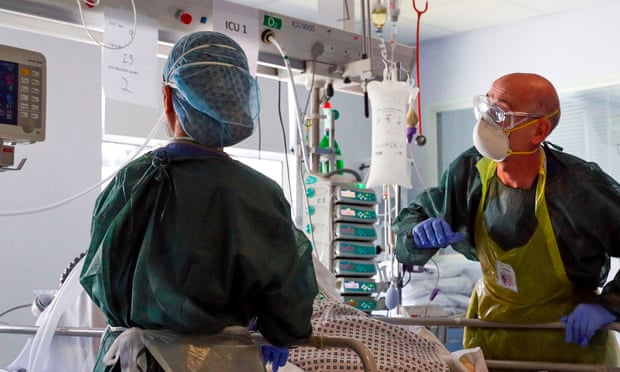 HOSPITALS are conducting “major incident” stress tests on wards to check if they are ready for a second wave of Covid-19, as the number of admissions begins to climb.

Coronavirus cases have been doubling roughly every seven days and there are signs that the increase is beginning to filter through to hospitals. Last Wednesday, 136 patients were admitted in England, twice as many as on any day in the previous week, with a total of 863 people receiving treatment.

NHS leaders are carrying out the checks amid growing concern about the mental wellbeing of staff, the rise in people needing treatment for alcohol-related injuries and the possibility that A&E departments will struggle to deal with coronavirus cases as well as business as usual.

Hospitals are trying to balance the need to treat Covid-19 patients with the pressure to tackle the record numbers of people waiting for routine operations, which has risen to 2.15 million – triple the figure from last summer.

Niall Dickson, the chief executive of the NHS Confederation, which represents trusts throughout the healthcare sector in England, Wales and Northern Ireland said trusts were “about to do a major incident-style scenario plan”.

“So they’re imagining again what it would be like, what they will have to do,” he said. “And they’ll do it as both desktop planning and using staff out on the wards. That is obviously happening all around the place.”

Dickson said the NHS was much better prepared for any second wave. Hospitals are now split into Covid and non-Covid zones, most hospital staff have access to personal protective equipment when they need it, and treatments have improved, he said. There are also better links between hospitals and social care providers, but staff rotas were not full, he added.

“In all the time I’ve been in the health service, I’ve never heard such anxiety from the leaders of services about the mental strain on their professional staff,” Dickson said. Doctors, nurses and other staff working in intensive care had seen “unprecedented death rates”.

“People react in different ways to that. You’ve certainly got individuals who are even contemplating walking away now, who just say, ‘I’ve had enough, I can’t do it.’ There are others who will have managed to get through all this. But there’s no doubt that after that intense period, you get a post-traumatic kind of effect.

“I’ve no doubt that NHS staff will step up but I would not underestimate the impact of that intensity of work which was required.”

Katherine Henderson, president of the Royal College of Emergency Medicine, said hospitals needed to work out how to ensure that patients are moved out of emergency departments quickly.

“Alcohol-related attendances dropped significantly during lockdown, but now we’re getting just as many people coming in drunk as we did before,” she said. Yet emergency departments have less space, because they need to avoid spreading the virus.

“We need organisations to really focus on getting patients out of hospital who don’t need to be in a hospital bed,” she said. “That is absolutely critical. So they need good relationships with social care, and it really needs to be seven days a week, not five days a week.”

“The only way to make sure the NHS can deal with a second wave, especially as we approach the winter months, is by giving the health service what it needs – people, resources and funding,” he said.

“Without that, we risk starting on the back foot again, with hospital capacity teetering on full, operation waiting lists continuing to climb, and doctors and nurses working without adequate PPE on the edge of suffering burnout.

“This cycle cannot continue, which is why the government must not only do its duty in creating clear, logical messaging for the public to know how to stay safe and how to help relieve pressures on hospitals in the first place, but also properly fund our health service, so that anyone who needs our help – regardless of whether we’re fighting a pandemic or not – gets it.”