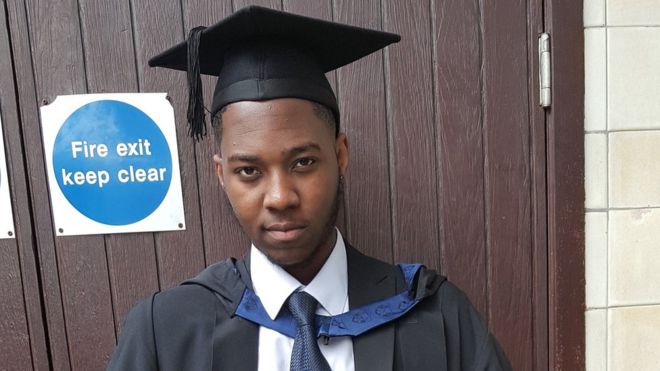 Two teenagers have been arrested on suspicion of murdering an NHS worker who was stabbed to death days after his father died with coronavirus.

David Gomoh, 24, was attacked seconds after leaving his home in Newham, east London, on 26 April.

A 19-year-old man held in Stratford on Friday and a 16-year-old boy detained in Telford, Shropshire, on Saturday, remain in custody.

Gomoh, whose mother is a nurse, was attacked on Freemasons Road, close to the junction with Kerry Close, at about 22:25 BST.

The Southbank University graduate worked for the NHS helping to supply staff with essential equipment.

Police said Gomoh was killed just days before the funeral of his father, who died after contracting Covid-19.

“Within days his mother has seen the death of her husband and son – his sister has lost her father and brother. Both are now heartbroken.”

He added: “David and his mother, who have done so much to help the community, now need the public to come forward and tell us what they know.”

Police urged anyone with information about a stolen silver Dodge Caliber which was abandoned at about 22:30 in Lincoln Road, to come forward.

Officers said the car, which had a temporary wheel on the front passenger side, was stolen in Dagenham on 16 April and was on cloned plates when it was recovered.