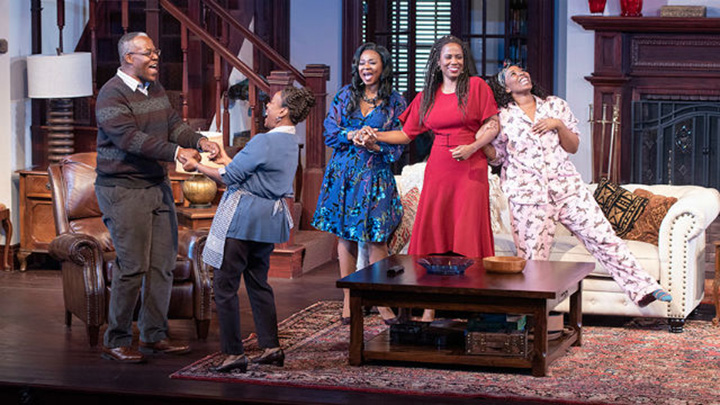 The cast of “Familiar” at The Old Globe
Spread This News

UNITED States: Certain thematic threads run through all immigrant stories:  assimilation vs. tradition; whether or not to retain the old language, culture and customs; and the inevitable cross-generational and cross-cultural clashes.

A wedding almost always throws a family into conflict. But for the Chinyaramwiras, the situation builds to a feverish pitch.

This highly successful and highly assimilated upper middle-class family has been settled in Minnesota for decades, having immigrated from Zimbabwe. The parents haven’t been back, but their younger daughter Nyasha just returned from a sojourn intended to embrace her roots (on a visit to Zimbabwe 19 years ago, during the Mugabe years, my husband and I visited the same places she mentions).

A freewheeling singer/songwriter and “feng shui consultant,” Nyasha even learned to play the Mbira (an African thumb piano), and she composed a song that gives the play its name (actual composer: Somi).

It’s her older sister, Tendi (Tendikayi), the “perfect” one, the more conventional, upright, tightly-wrapped attorney, who’s getting married — to a white American man. They’re both hyper-“Christianized” (and practicing abstinence — to the amused astonishment of the bride’s sister and groom’s brother).

And they both want to honour her Zimbabwean heritage by having a pre-nuptial Shona ceremony, “roora,” which includes the groom’s family paying a ‘bride-price’ (which, in the homeland, often entails goats and cows).

To perform the ceremony, the bride and her father have surreptitiously (behind the back of the stern mother-of-the-bride) invited the estranged aunt, who still lives in “Zim.” And that’s when the dangerous family fun and games begin.

The Zim/American culture clash is the funny centrepiece of the first act. The ululations and spontaneous, joyful Shona singing are a highlight.

The second act takes a more serious turn, as long-hidden, life-changing secrets are revealed, the three older-generation sisters come into sharp conflict, the bride’s father and mother are at a breaking point in their marriage, and reluctantly (except for the aggressive, persistent, traditionally-garbed Zimbabwean aunt), the truth comes out — for better or worse.

In Gurira’s sharp, witty writing (she’s also an actor; you might remember her as the stunning warrior woman Okoye in the film “Black Panther”), the family dynamics are totally credible, including the sibling rivalry in the younger generation.

But the first act goes way over the top, a number of plot-points don’t quite gel or resolve, and there are several extraneous occurrences: the younger sister’s frostbite (she escapes the conflict by running out into the Minneapolis winter in her pajamas); the subsequent skin-to-skin body-warming undertaken as an act of hypothermia treatment by the military veteran brother of the groom; and the shocking revelations about the bride’s history. These elements, while provocative, are unnecessary and over-stuff the play.

The cultural issues alone are enough; there’s a full range of perspectives on embracing the new culture, retaining traditions, staying in the Old Country, or leaving, or revisiting. Forgiveness, healing and uniting (which makes the ending a bit pat). But all that, coupled with the fraught family interactions, is quite satisfying, without any additional superfluous plot-points.

Surely, there’s no quibble with the production, with its marvellous set (a detailed well-to-do, bi-level, high-ceilinged home, with touches of Africana, designed by Walt Spangler). The sound (Rob Milburn, Michael Bodeen) is crisp, and the lighting (Jason Lyons) enhances the action and interactions.

Under the incisive direction of Edward Torres, the cast is outstanding. The accents seem credible (Nathan C. Crocker is the voice and dialect coach, Rufaro Gwarada the cultural consultant), and there’s a good deal of the Shona language — some of it untranslated — more impressive for the fact that none of the cast knew the language before.

As the indomitable — and not always likable — Zimbabwean aunt, the riveting Wandachristine is a veteran of the show, having toured in the role before. Danny Johnson gives a sensitive portrayal of the conflicted father of the bride.

Together with Lucas Hall as the groom and Anthony Comis as his less polished, more amusing brother, the men provide a nice counterpoint to the well-educated, well-spoken, constantly quarrelling females:  excellent Cherene Snow as Marvelous, the strict mother  who is hellbent on assimilation and has high expectations for her daughters; energetic and convincing  Olivia Washington and Zakiya Young as those daughters (though the older one, Tendi, has been given a number of under-motivated actions); and Marvelous’ two sisters: Anne from Zimbabwe, whom she resents; and Margaret/Maggie (down-to-earth Ramona Keller), who tries to be the family peacemaker.

There are many universalities, many deep cultural and familial considerations, and equally many laughs — often hearty and well-earned. The play could be shortened and tightened, but the production couldn’t be better.