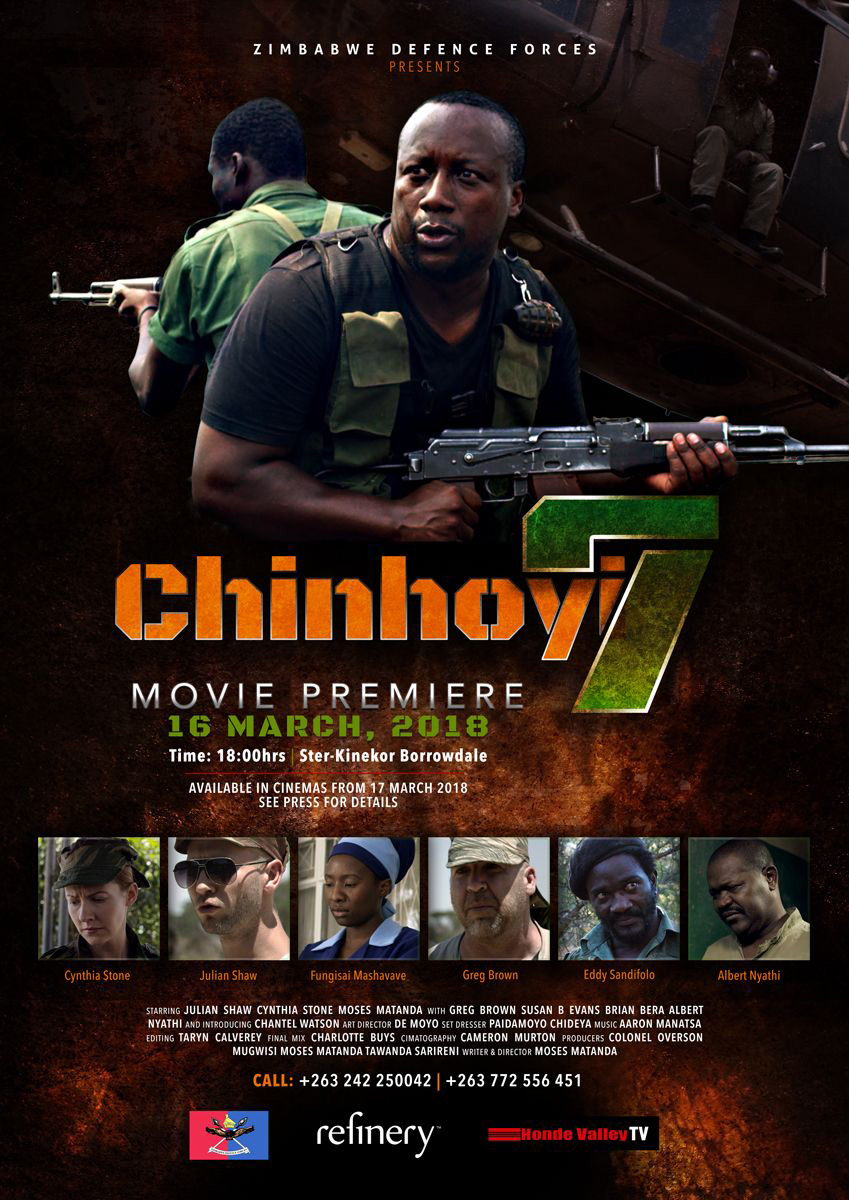 CINEMA chain Ster-Kinekor are getting ready to layout the red carpet for the star-studded premiere of war biopic Chinhoyi 7 which is scheduled for 16 March in Harare.

The two-hour-long film, commissioned by Vice President Constantino Chiwenga when he was still the Commander of the Zimbabwe Defence Forces (ZDF), was written and directed by Canada-based filmmaker Moses Matanda, and chronicles the famous battle of Chinhoyi which ignited the Second Chimurenga in 1966.

Featuring both local and international actors, the movie has a glowing cast, including gospel singer Fungisai Zvakavapano-Mashavave who plays Sarudzai, a maid working at a Rhodesian army general’s house.

British actor Julian Shaw as well as Canadian actors Cynthia Stone and Nick Smyth are among the cast. Poet, Albert Nyathi is also in the film and plays the late Joshua Mqabuko Nkomo.

The project, which began production in 2014 is a joint venture between the Zimbabwe Defence Forces (ZDF) and Honde Valley Television that is based in Canada.

“The Zimbabwe Defence Forces played a pivotal role in bringing Chinhoyi 7 to life. We worked closely with them to capture the true essence of this historical story,” said Matanda.

“The Chinhoyi battle is a significant piece of history. It is one I wanted to tell because it was the ﬁrst attack by black soldiers against the Rhodesians, which sparked the armed liberation war,” he added.

Matanda said the country needed to be aware of the struggle endured by liberation war heroes. He added that it was important to honour and appreciate the role that struggle veterans played in paving the way for its independence.

A series of roadshows will take place shortly after the premiere for up to six weeks in state-of-the-art cinemas as well as in a number of stadiums in some towns and cities, including Bulawayo.

The production team have also announced that it will be shown three times a day, and that there are plans for it to be exhibited in schools across the nation. A European tour is also on the cards later in the year with screenings scheduled in Canada and several states in America.

The film was shot in a number of locations in Zimbabwe to portray different events of the war and included key scenes in Domboshava, Victoria Falls and Mutarazi Falls.

The Chinhoyi seven were a group of valiant liberation war fighters that secretly entered Rhodesia, now Zimbabwe, from Zambia in April 1966. In the events that followed, the seven were intercepted by the Rhodesian army, provoking the first battle of the Second Chimurenga. It was effectively the first military action against Ian Smith’s regime after his infamous Unilateral Declaration of Independence in November 1965.

The seven were attacked by the Rhodesian army with jet bombers and helicopter gunships but they held the forces for the whole day until they ran out of ammunition and were all killed.

The film’s executive producer, Tawanda Sarireni, said that Chinhoyi 7 mirrored an important account of the history of the liberation of Zimbabwe.

“There are so many stories of the liberation struggle that still need to be told – undocumented recollections by those who lived through it or experienced it still to be collated and published,” he said.

“It is our duty as Zimbabweans to acknowledge and shine a light on those who were brave enough to fight for the freedom of our country, and Chinhoyi 7 is just one of many.”

Meanwhile, advance tickets are available to purchase before the night from fast food outlets, but a limited number will be sold at the door on a first come first served basis.

Sarireni stated the premiere is a Black-tie affair, adding that the official proceedings will be streamed live by an independent broadcaster as well as national broadcaster, ZBC.

“We have a full programme for the evening that will include a military procession, exhibition and several key speeches from esteemed dignitaries.

“There will also be a meet and greet segment with the actors and the audience will have the opportunity to ask them questions about their personal experiences of shooting the film.”