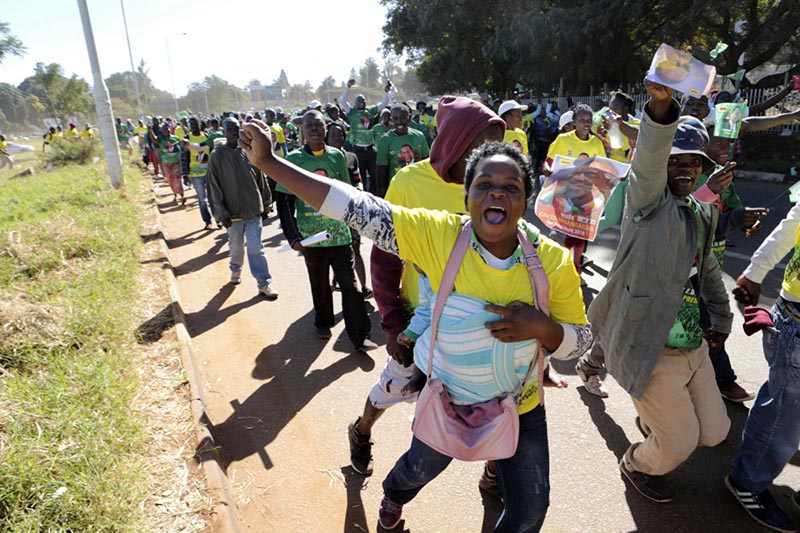 WITH the recent announcement of July 30 2018 as the election date, Zimbabwe is less than two months away from crucial polls that are expected to restore political legitimacy following the military-led ousting of Robert Mugabe in November 2017.

There are six make-or-break issues that will singularly and collectively determine whether Zimbabwe’s upcoming elections will be free, fair and credible.

The integrity of the voters’ roll

The Zimbabwe Electoral Commission (ZEC) announced in early 2016 that it will introduce the Biometric Voter Register (BVR) for the 2018 elections. The apparent aim was to develop a reliable register or database of voters after over 30 years of a shambolic voters’ roll that was managed by the Registrar General and known to contain unverified numbers of dead people. A cleaner register would ostensibly create trust and confidence in a largely discredited voters’ roll, which in 2013 was not released in time for inspection and verification by the public and political parties. It became one of the main sources of the 2013 electoral dispute between Zanu-PF and the opposition.

Several concerns have been raised about the current BVR, most important of which relates to its authentication. Recently, the Electoral Resource Centre (ERC) asked ZEC to share the provisional voters’ register so that it could independently audit or validate it, but the elections body turned down this request. ERC is pursuing legal action to compel ZEC to disclose the register. The refusal by ZEC to release the provisional voters’ register is worrying. It runs counter to a commission that claims to want to earn public trust and confidence and raises fears that the elections body will redeploy the 2013 strategy for the coming elections.

The danger here is the possible manipulation of the voters’ roll in a variety of ways including “resurrecting” dead voters; facilitating multiple registration, and deliberately under-registering in certain areas to disadvantage political contestants or parties.

The simple fact is that the public does not trust ZEC. In several public surveys since 2013, ZEC has consistently scored embarrassingly low on public trust. Refusing to share the voters roll for inspection only makes things worse. In fact, in genuine democratic processes, the voters’ roll should be open for inspection, verification, authentication and audit on a continuous basis all the way until the election.

The new voters’ roll has to be independently authenticated and audited. This would ensure that voters and political parties are assured of its sanctity or cleanness.

Integrity of the ballot paper and the vote

The ballot paper is the most important document in any election. It sets out who is contesting and provides for voters to select their preferred candidate from a range of choices. After voters have selected their choice, ballot papers are counted and the winner determined. It therefore follows that the rigorous control and accountability over the number of ballot papers printed is central to ensuring a fair electoral contest. Without this, it is possible and easy to print more than the required ballot papers and assign the additional to a contestant giving them advantage through what is called ballot stuffing – an age-old rigging strategy.

The process of printing, safeguarding and accounting for ballot papers is a make-or-break issue for free and fair elections. It is one of the issues that led to the annulment of the Kenyan presidential election result by the Supreme Court of Kenya.

The opacity and secrecy around the procurement of ballot papers and other electoral material by ZEC raises significant concerns for the integrity of the ballot paper. At best, it suggests an unaccountable and flippant attitude that ignores the importance of building trust in every key aspect of the election. At worst, it clearly suggests some grand plan to manipulate the election.

The procurement process must be immediately opened up to public scrutiny to ensure transparency and accountability. ZEC must elaborately explain its strategy for managing and securing the ballot paper through the entire electoral chain.

The integrity of the Zimbabwe Electoral Commission

For many years, there have been allegations regarding lack of independence of the ZEC. In its earlier life, the ZEC was an electoral supervisory commission, staffed intermittently by government employees deployed during electoral periods. In 2008 it sunk to the lowest depths by failing to declare electoral results for 45 days in violation of the constitution and the law. This was followed by an incredible declaration that provided a lifeline to former president Robert Mugabe to contest a presidential run-off from which the late MDC leader Morgan Tsvangirai withdrew due to widespread political violence against his supporters, leaving Mugabe to run uncontested. The ZEC unashamedly declared Mugabe victor in an election whose credibility and transparency was roundly condemned, resulting in SADC brokering the formation of a coalition government.

In keeping with regional and global best practice, the ZEC was reconstituted as an independent full-time commission in the 2013 constitution. But only on paper. Although the ZEC now has a different composition from the one in 2008, it still does continue to have commissioners and senior staff from back then. This can hardly endear it to the public or generate the required trust and confidence. There are also many allegations that it is staffed and manned by security and intelligence operatives that are pro Zanu-PF. The recently amended electoral law has not insulated it from executive interference as is standard practice in several democracies.

Given its dark past, what would help the ZEC enhance its integrity in the eyes of the public would be for it to go beyond its rhetorical assurances of its independence by acting independently and transparently. It is not enough for the ZEC to repeatedly say that since the constitution provides for its independence, it therefore follows that it is. For instance, members of the executive, particularly the ministry of justice, should not influence decisions and operations of the commission as is the case. And as a public institution funded by taxpayers its recruitment procedures must be publicly known. Positions within the commission must be advertised, interviews for senior staff done openly for public record and scrutiny, just the same way the Judicial Service Commission does for judges whose independence is considered sacrosanct.

For now, to enhance its credibility the ZEC would do well in disclosing profiles of its full staff complement and how they were recruited and assure the public of its independence and that of its staff.

During Mugabe’s rule, Zimbabwe enacted laws and amended existing ones making the country’s legislative environment the most draconian in modern times. One of these is the Public Order and Security Act (POSA), which is purportedly aimed at maintaining public order and security but fashioned along the dreaded Rhodesian Law and Order Maintenance Act (LOMA) that singularly propped up the racist minority regime by clamping down on popular demand for majority rule.

LOMA was the law used to detain and imprison thousands of pro-democracy Africans including the current political leadership. Under Mugabe, the government fortified LOMA and did more to restrict the exercise of constitutionally enshrined civil liberties including free political assembly and participation. According to POSA, police notification is currently required to hold public meetings, rallies and protests. However, the police have routinely used the law to deny groups perceived to be against the government permission to gather or protest despite the fact that freedoms of assembly, association and expression are explicitly enshrined in the constitution and citizens do not need police authorisation. Those that defy police orders have had their meetings and gatherings violently broken up and organisers arrested.

Coupled with this, is the Criminal Law (Codification and Reform) Act (CODE), which contains a raft of provisions that criminalise critical comments on the office of the president; publication of false information perceived to be prejudicial to the state and breaches of public peace. These have mostly been used against genuine protesters and those opposed to the government.

The other, ironically named the Access to Information and Protection of Privacy Act (AIPPA), was in fact aimed at curbing free flow of information, freedom of expression, media freedom and diversity as well as unhindered practice of independent journalism in the country.

To its credit however, post November 2017 the government has benevolently loosened up on the strict enforcement of POSA, AIPPA and the CODE. But benevolence is not enough and is not what is required. POSA, AIPPA and provisions of the CODE are draconian and unconstitutional pieces of legislation that do not belong in an open and democratic society. As long as they remain on the statute books they can and continue to be selectively used against government critics and opponents. They must be repealed immediately.

Provide assurance that the military and other security institutions will play no role in the election, especially in rural areas

The military has not publicly withdrawn its 2002 statements announcing that they will not accept a Zanu-PF electoral defeat. Instead, since then it has played a prominent role in mobilising support for Zanu-PF by committing violence and intimidating the rural population to vote for the party. This was the case in 2008. The military has also made it clear that the reasons for removing Mugabe were to prevent further purges of comrades in the party and to save the party from defeat in 2018. Will it therefore accept a Zanu-PF defeat in July 2018?

There are worrying reports of deployment of over 2,000 soldiers to rural areas already. Although there may eventually be no violence, this alone is sufficient to scare and intimidate rural voters (who are keenly aware of the past bloodletting in 2008) to either vote for Zanu-PF or not vote for the opposition. More recently, police officials were involved as returning officers and also provided security in Zanu-PF’s primary elections in April, highlighting the extent of their partisanship. Encouragingly, in a break with past practice there was condemnation of this by the presidency but the fact that it happened and no sanctions meted on those involved is concerning enough.

This means that all contestants must be given equal coverage to campaign and canvass for support. Media plays a crucial role in providing channels for both candidates and voters alike to share and receive information about the value propositions of respective candidates and parties. While private/commercial media retains its prerogative to cover and charge parties who use it, public broadcasting media belongs to and must be accessible to all.

Currently, only Zanu-PF has access to state broadcasting media. In addition, the coverage of the opposition by state media has been negative and unbalanced. According to daily media monitoring reports produced by Media Monitors Zimbabwe, Zanu-PF continues to enjoy overwhelming airtime and space in the state media, including live coverage of President Mnangagwa’s campaign rallies. The few times the opposition is covered, it is to project it negatively. This is clearly in violation of Section 61 (3) and (4) of the constitution, which proscribes editorial interference in the state media and enjoins them to be impartial and afford fair opportunity for the presentation of divergent views and dissenting opinions.

While new forms of media including social media mitigate this challenge in urban areas, low internet penetration and connectivity in rural areas means that public broadcast remains the most accessible to rural communities where the majority of voters reside. Successive audience research in Zimbabwe shows that the majority of Zimbabweans rely on radio, especially the state-run outlets, for information. In the absence of a significant and noticeable shift by state broadcasting media to provide equal electoral coverage to all political contestants, it cannot be said in the final analysis that the 2018 election can be free and fair.

While the six make-or-break issues sound alarming, there is still time – albeit very little – to remedy these flaws before they deliver fatal blows and irredeemably taint the transparency and credibility of the very crucial 2018 elections. The window for fixing them is shutting – fast.

Siphosami Malunga is the Executive Director of the Open Society Initiative for Southern Africa. This article was initially published by dailymaverick.co.za.