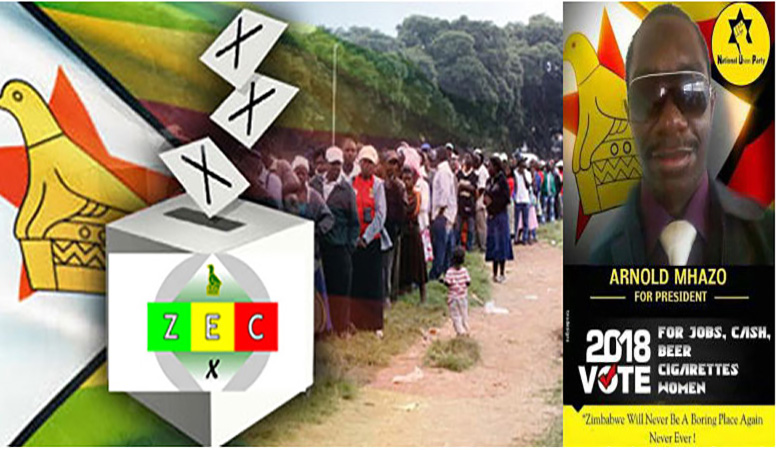 IN a democracy‚ nearly anyone can run for office. That’s also the case in Zimbabwe‚ which is basking in new-found freedoms that have accompanied the end of Robert Mugabe’s rule.

The upcoming elections are indicative of the more liberated climate that has followed Mugabe’s military ouster in November last year. Election candidates include everyone from humble community activists to seasoned politicians.

One of the more colourful contenders has amused voters with his promises of women‚ cigarettes and beer. Arnold Mhazo of the Zimbabwe National Union (ZNU) party in his campaign poster offers the above and says: “Zimbabwe will never be a boring place again. Never ever!”

Before his campaign poster went viral‚ Mhazo was unknown. According to law in Zimbabwe‚ anyone can form a political party but the Zimbabwe Election Commission (ZEC) says to take part in an election they have to part with $1‚000 for the presidential election‚ parliamentary candidates $50 and local government $10. The money is paid as registration with the Nomination Court.

So far 115 political parties and hundreds of individuals have informed the ZEC of their intention to take part as election candidates.

Josphat Mzaca Ngulube‚ a former teacher who is now a cell phone trader‚ has been causing headaches for big parties in the Bulawayo South constituency‚ where he is campaigning to become the local legislator.

“People are tired of false promises‚” he said.

Ngulube gathered the courage to enter politics last year when he staged a one-man demonstration in Bulawayo. His follow-up protest was joined by the retired and elderly‚ whose pensions were eroded by inflation.

“The trick is that I speak their language and I suffer the same prejudice as them. I remember‚ after one demonstration‚ I didn’t even have transport money and I walked with them back to the township. When we got there‚ there was no electricity and we went looking for firewood together. To these people I am not a politician but a resident with good intentions‚” he said.

In no time Ngulube’s rallies started drawing considerable crowds‚ until rival parties placed their posters on top of his.

“Political parties have money and I don’t. When I place a poster‚ they counter me. Anyway‚ thank God for social media‚ I am changing my tack‚” Ngulube said.

Bulawayo businessman Kwanele Hlabangana of the Republican Party of Zimbabwe (RPZ) believes his involvement in the presidential race will be crucial.

“We are going into this election to win. The percentage at which we are going to win will be determined by the number of political parties that are participating in this election‚” he said.

There is also Gwinyai Muzorewa‚ younger brother to former Zimbabwe-Rhodesia leader Bishop Abel Muzorewa‚ who is eyeing the presidency‚ having inherited his brother’s United African National Council (UANC). His sudden emergence is because the climate is conducive.

“We have not been taking part in previous elections because the playing field was not favourable‚ but we are just hoping that this time around Zanu PF is going to create a conducive environment for fair play‚” Muzorewa told News Day last week.

UANC has participated in three elections since independence. The party got three seats in 1980 and went on to get zero at the 1985 and 1990 elections.

In 2013 there was Kisnot Mukwazhi with the Zimbabwe Development Party (ZDP). His arrival was treated with suspicion that his party was an auxiliary project of the ruling party Zanu PF.

Before him there was Egypt Dzinemunhezva‚ who in every election cycle would surface from his rural home in Wedza in Mashonaland East to declare his presidential bid.

The trick is that I speak their language and I suffer the same prejudice as them.

“Many will fall off. The choice will come down to three parties. The voter uses a heuristic gauge on the viability of candidates and‚ notwithstanding the field‚ you will see the pattern emerging because the crowded field will be immaterial to the final outcome‚” he said.

For 37 years Mugabe was feared as an iron-fisted ruler‚ having pushed Zimbabwe into a one-party state in 1987. The fall of the brief one-party state system in 1990 was partly because of the collapse of the communist bloc‚ ushering Zimbabwe back into multi-party democracy.

With Mugabe gone‚ there is a sense that the upcoming elections are for the taking.

“The number of parties in this election cycle is indicative of the fall of Mugabe and the death of (Morgan) Tsvangirai. There is a sense that it’s now an open field and many are of the belief that Emmerson Mnangagwa and other ‘mainstream’ opposition entrepreneurs are ill-fit for the job‚” Ncube said.