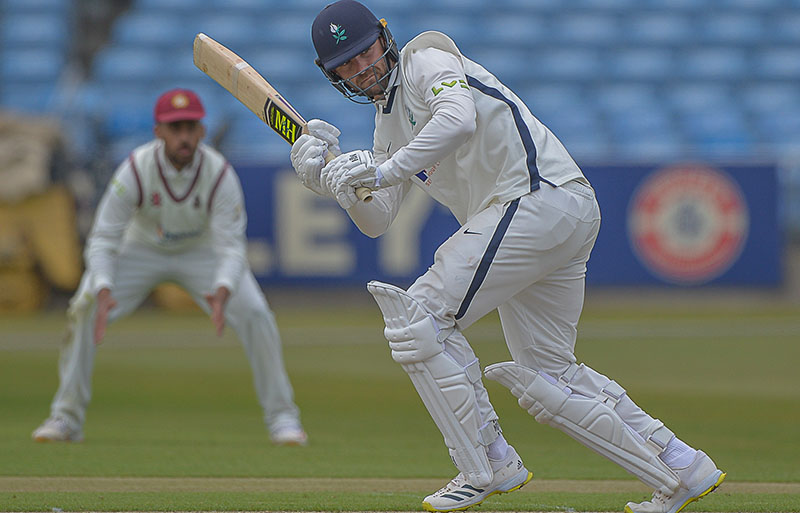 WILL Fraine is targeting success against the red ball with Yorkshire this summer, and believes a more relaxed attitude will be key for him.

Fraine has travelled to Dubai for the county’s pre-season tour, hot on the heels of a profitable four-game first-class spell in Zimbabwe through January and February, where he played for the Eagles team.

The 25-year-old posted scores of 45, 88 and 85 in his favoured opener’s position, giving him significant confidence that his game is in good order as he bids to marry County Championship form with his excellent recent displays in T20 and one-day cricket.

“It was terrific,” he said of his African adventure.

“The guys were really friendly, the coaches were good, the facilities great.

“To be able to get time batting over those four games, at that time of year, was priceless. There’s no substitute for getting out in the middle.

“It’s a format I’ve not played a lot of, especially in the first team, since my knee injury in 2019. So it was great to get some confidence back.

“I’ve tweaked a lot of things in my game, new movements and such, to try and help me get back to basics really. And it went well.

“Over there, where there’s not as much lateral movement in the pitches, it’s more about the concentration element of trying to bat for a long time. Hopefully it stands me in good stead for the start of the year.

“The last couple of years have been a bit more white ball positive for me. I think it’s the side of the game which I’m more natural at. But I love red ball cricket.

“I got that hundred against Surrey at Scarborough, but around that I got a lot of starts – thirties, forties – which I should have kicked on from. But I showed myself and the coaches that I can be valued at the top of the order.

“Then, after my knee injury, there wasn’t really a space.

“When I got a go, it would just be a game here and there. I’d get left out for guys returning like Joe Root and Dawid Malan. That’s understandable but still frustrating.

“Performance in the second team hasn’t been an issue.

“I averaged 75 last year and got hundreds, and the trip to Zimbabwe was so good because it showed me that I have got a template for success again. I am confident in my defence, which I perhaps wasn’t last year in the first team.

“I probably let myself down a bit. But, hopefully, I can show my value to the red ball side over the next couple of years as well as kicking on against the white ball and becoming a top player in those formats.”

Fraine lived with Hampshire batter Nick Gubbins, who was another of a handful of English players out in Zimbabwe, and the Huddersfield-born right-hander batted both in the middle order and as an opener.

“I batted four in my first game, but I’m much more comfortable at the top of the order,” he continued. “I think that’s rare among players these days. That’s where I would want to bat.

“I’ve not batted three or four a lot, but it’s just different. Some days you’re in second ball of the innings, which I actually prefer rather than waiting around for a couple of sessions like you can do. That’s when you over-think and over-analyse.”

Fraine scored 393 runs in eight aforementioned Championship games in 2019 before twice dislocating his left knee at home and abroad towards the end of that year, forcing him to have surgery.

In the following two seasons, he has only scored 67 runs in six Bob Willis Trophy or Championship matches.

All of that has come while he has excelled against the white ball, playing some exhilarating innings as a finisher in the Vitality Blast and in the opener’s berth in the Royal London Cup.

He is a self-confessed over-analyser, reasoning: “It’s because I care a great deal about helping this team.

“Yorkshire is a big club with a lot of pressure. I want to do justice to the shirt. So when you get a lot of low scores, it can be quite detrimental.

“When it isn’t going your way, you can dwell on things too much.

“But when I look back at my good innings – the hundred against Surrey, Chesterfield last year in the one-day Cup – it was more a case of backing myself and enjoying it. That’s what I’m going to try and do this year, enjoy it.

“My biggest strength is hitting boundaries.

“The last few years, just because of a bit of a fear of failure and not being sure of my place, I have gone into my shell a bit and just tried to survive. That just isn’t me.

“In Zimbabwe, my strike-rates weren’t ridiculous. They were 40 or 50. But I was always looking to score. When you are doing that, you get into good positions and defend well.”

The ongoing pre-season tour is an important 10 days given the new coaching appointments, led by head coach Ottis Gibson.

Fraine accepts there will be an element of individuals wanting to impress Gibson, his new assistants Kabir Ali and Ali Maiden and second-team coach Tom Smith.

But that is by no means of primary importance.

“The main thing about this tour is getting to know the new coaches and them getting to know us,” he added. “The coaches have made a good first impression, and I think we have with them.

“The guys have really been working hard this winter.

“I don’t think you really want to go down the route of, ‘I need to impress this person or that’. If you do, you put yourself under pressure and it can create a bad environment as well.

“At the end of the day, we want to win trophies for this club. And to do that, we need to gel as a team and staff. Things have been really good so far.”