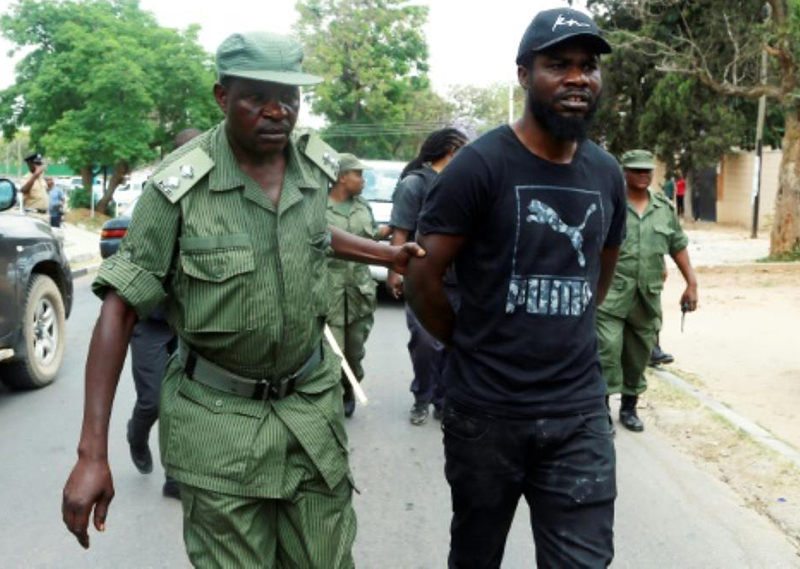 Zambian musician Chama Fumba, known as Pilato, is led away by police after the protest
Spread This News

LUSAKA: Six Zambian activists including a celebrated hip-hop musician appeared in court on Monday after they staged an anti-corruption protest as the government was unveiling the budget.

The group, which includes popular artist Chama “Pilato” Fumba, was arrested in the grounds of parliament last September.

They were protesting over the $42-million (36-million-euro) purchase of 42 fire engines as Finance Minister Felix Mutati delivered the budget inside the building.

They pleaded not guilty to charges of disobeying a lawful order and insisted they had a right to protest within the grounds of parliament.

Defence lawyer Keith Mweemba challenged police chief inspector Anthony Phiri over the arrests, arguing they had a constitutional right to protest at the legislature even if they had not been invited to attend the budget speech.

“According to the constitution, the six have the right to protest at parliament grounds,” Phiri conceded.

Magistrate Mwaka Mikalile bailed the six to return to court on August 10.

“So far we are happy with the way the case is moving,” said accused protester Laura Miti after the hearing.

Fumba was arrested in May when he returned to Zambia from South Africa, where he fled after his hit song, “Koswe Mumpoto” (Rat in the Pot), drew angry reactions from supporters of Zambia’s ruling Patriotic Front (PF) party.

The track was widely interpreted as a protest song accusing President Edgar Lungu and his government of being corrupt.

“The Zambian authorities must quash these charges which are clearly being used to silence any voice that dares to criticise the government or expose wrongdoing,” said Amnesty’s southern Africa director Deprose Muchena.

President Lungu has been accused by Zambia’s opposition of increasingly authoritarian behaviour.

Main opposition United Party for National Development party leader Hakainde Hichilema was remanded in custody last April on treason charges after his motorcade was involved in an incident with Lungu’s.

Lungu triggered emergency powers in July, increasing police powers of arrest and detention, and blamed opposition parties for a string of arson attacks.