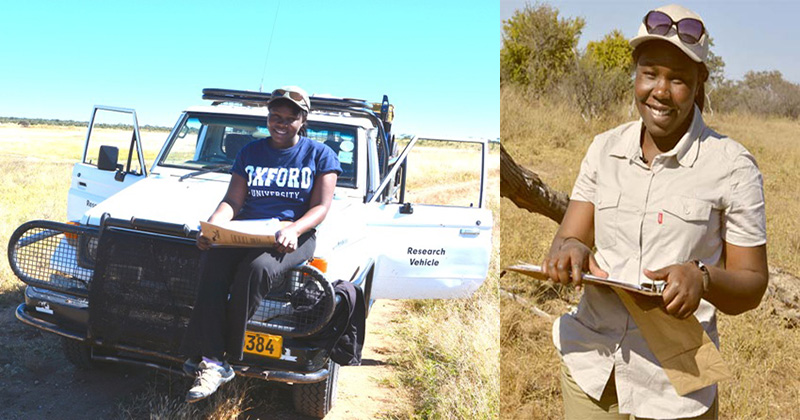 FROM financial and family challenges to outright discrimination and harassment, being a woman in the sciences is still a struggle for many people around the world. But what if you are starting your career in a country or culture where women’s rights are barely even a thing?

The stories of women who are facing—and overcoming—such barriers have become a driving force for National Geographic Explorers Clare Fieseler and Gabby Salazar, who highlight the issue in their new documentary Outnumbered in Africa. The film, which has its world premiere this week at the National Geographic FURTHER Film Festival in Washington D.C., focuses on the life and work of Moreangels Mbizah, a lion conservationist from Zimbabwe.

In a conversation with National Geographic, Fieseler and Salazar discussed the inspiration behind their documentary, gave us a peek at what it was like to film with Mbizah, and offered advice for young women around the world interested in pursuing a career in science.

What inspired you to produce Outnumbered?

Salazar: We were inspired to do this project because the state of women in the sciences differs a lot across different areas and geographic boundaries. Women in developing countries face barriers that are little bit more hidden and a little bit more subtle, and ones that take a little more time to unpack, and that’s what we’re really interested in.

How did you get in touch with the film’s main character, Moreangels?

Fieseler: I met Moreangels at the International Congress of Conservation Biology in France. While we were at the conference, Cecil the Lion was shot, and they put together this pop-up seminar with people at the conference who were really involved in lion conservation, and she was one of the panelists. I was really impressed by her eloquence, and I went up to her afterward and said, I want to learn more of your story, so we just started Skyping. Then I approached her and asked if she would be open to us coming and filming her, and she was.

What did you feel made Moreangels’s story so important?

Salazar: We’ve been really lucky being in the scientific community we have, where we see the stories behind women scientists. We develop personal relationships with them, so we can talk about some of these barriers that we faced and learn from each other. But I think in other countries, where those networks are less strong sometimes just because they haven’t been established, women maybe don’t have that open dialogue with each other as much.

For us, that was a big thinking point to do this project. Ultimately, we want Moreangels to not just inspire women here and to make them think differently, but to inspire women in Zimbabwe or sub-Saharan Africa to push through some of these barriers. She is such a strong character, and somebody who’s made that choice and really done amazingly well.

What do you think inspired Moreangels to pursue a career in science?

Fieseler: I think it’s commitment. She’s so committed to her country and bettering wildlife there. In the film, we devote some time in her interview where she talks about wanting to stay in Zimbabwe, even when the economy is collapsing. She is a Ph.D. graduate from Oxford and could basically get a job anywhere, and she’s returning to one of the most destabilized countries.

Brain drain is a real issue in this instance, where people leave their home country because they can have a better life somewhere else. I think it’s time we pay attention to the people who choose to stay and return their scientific skills and expertise to where they’re from.

Your film addresses issues specific to Moreangels’s culture in Zimbabwe, such as a strong stigma against women being away from the home. But she also faces issues that are universal for women in science. Can you tell me more about that?

Fieseler: Gabby and I didn’t know anything about Zimbabwe culture, and it took us a lot of time with Moreangels to understand the challenges she faced. But for her, the thing she struggled with the most was time away from her son.

Salazar: One of the first things that we wanted to highlight is motherhood, and the struggles of motherhood are things that a lot of people can relate to and try to balance in any career.

Moreangels really opens up to you, and it is really powerful. That says a lot about the trust and friendship that you’ve built.

Fieseler: Gabby and I had a very emotional interview with Moreangels. We’re crying behind the camera when she’s talking, and that conversation lasted well beyond after the cameras turned off. But there’s something about showing your most vulnerable side that gets people to really wake up.

You plan to tell more stories of women scientists around the world. What led to your project’s focus?

Salazar: For me, it was personal friendships. We spend a lot of time in the field working in countries where it’s pretty uncommon to see a woman on a research team in the field. In parts of Indonesia, where I’ve done a lot of work, there are women who are doing amazing work.

But I’ve realized it’s just a lot harder for them to be able to take that leap, to do the research, to do the work. So, it was really building on those personal stories that I was hearing, and I thought these stories really need to be given a broader voice, because they really helped me appreciate the ‘women in science’ story from a very different place.

What’s next for you after your film premieres?

Salazar: We’re working really hard to put a book together that could help give advice to young women and girls from today’s women scientists and explorers about how to navigate this career path and how to lead lives full of exploration and adventure.

Fieseler: For Gabby and I, we started talking about this project three years ago, and it’s been kind of a process to get it done, but we don’t view this as a ‘we’re only going to devote the next two years to this.’ This is a lifelong passion for both of us.

What would you say to a young woman interested in science?

Fieseler: I would encourage their passions and whatever they’re feeling at that moment, because it will change. Encouraging a confidence and curiosity to explore those things is just really key. And don’t take no for an answer.

Salazar: For me, it’s so easy when you’re presented with an opportunity to talk yourself out of it—it might be uncomfortable, it might be different. And I think, take those opportunities. If a part of you wants to do it, like going to do a field project in Zimbabwe or going to Costa Rica to do research or maybe an internship in an office that you never thought you’d feel comfortable doing, it’s way easier to talk ourselves out of it instead of talking ourselves into things.

But it’s those moments where we push ourselves that make us go forward.