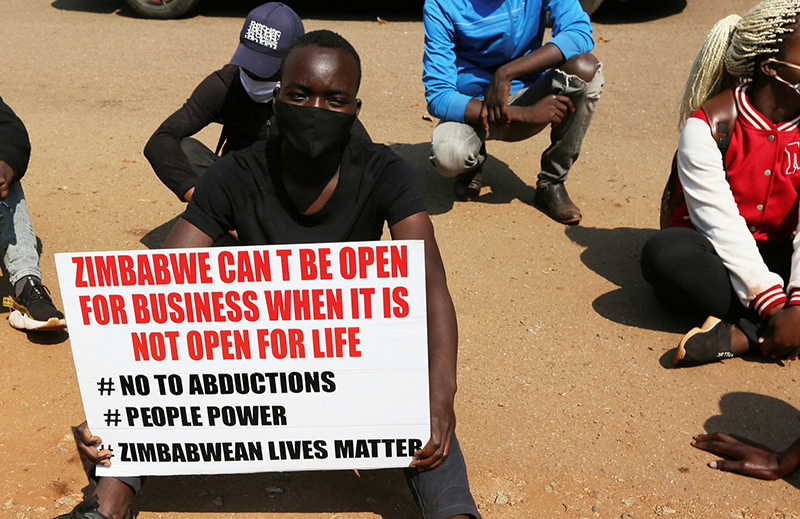 From January 1 2023, hundreds of thousands of Zimbabweans and their children will no longer be able to live, work and go to school legally in the republic

Three Zimbabweans who held Zimbabwean exemption permits (ZEPs), which the SA government has now scrapped, share their anxiety and anguish as they face deportation, uprooting their lives and children and starting all over again in Zimbabwe, or continuing to live here as undocumented migrants.

Shepherd Muroyiwa is one of about 178,000 Zimbabweans affected by the cabinet decision not to renew the ZEP, which expired in December 2021. ZEP holders were given until the end of December 2022 to legalise their status in the country by other means. For most this is not possible.

“There are no other people [here] selling what I specialise in. Moving to Zimbabwe would mean the death of my family’s livelihood,” says Muroyiwa. “It is like walking into darkness. We don’t know how we will survive.”

Muroyiwa started his business in 2009.

“We are only filling the gap and augmenting the SA economy. We can’t be accused of taking business from the citizens … There is empty space [a stall] right next to me. Why are they [South Africans] not taking it?

“If a South African takes over my business, to whom he is going to sell? As immigrants we have common foods we eat, and we sell to each other,” he says.

A preschool principal, who has been living in SA for 13 years and asked not to be identified, says she had hoped to get a waiver. A waiver allows the department of home affairs to disregard certain requirements for permission to stay, such as when an employer can prove they advertised for a job but no South Africans qualified.

She applied for a waiver from home affairs in December, but she has never even received a response. She followed up in February but was told she cannot start a new permit application until she gets a response.

She is anxious. She has copies of rejected waivers other Zimbabweans had received.

Relocating, she says, would be starting from zero.

“If we sell our belongings, it’s not going to be purchased for the actual value,” she says.

“My 12-year-old child speaks English and Afrikaans only. How is she going to be integrated in Zimbabwean government schools? … Children who have already moved to Zimbabwe are stressed. The adjustment is going to be huge.”

“I will lose my job … Mentally it’s eating me up, trying to think how I am going to survive,” he says.

He used to teach in a rural school in Zimbabwe but fled political violence in 2008.

“I had to run away from home, sleep in the mountains and eventually I came to SA. I had to sleep in a queue, braving cold, rainy weather for days before I got asylum, which I renewed every six months before the government implemented DZP [now the ZEP.]

“So, since then, I was on that permit. I got a teaching job in 2016. Before that I worked for a property management company. I then studied a BA in environmental management with Unisa and completed it last year,” he says.

He has two sons at university, a third in high school and a daughter in primary school. He says he has loans, furniture accounts and a mortgage to pay. But without legal status his bank account will be closed.

He says he will never get a job in Zimbabwe’s civil service.

“I would rather live here undocumented and I will only go when they deport me. This means I am turning myself into … a criminal to run away from law enforcement and home affairs officials, which is something that should not be happening to a professional person like me. Surely, the situation leaves me with no choice but to live under the radar?” he says.

“We are in this position because of this brotherhood in Africa where presidents are shielding one another instead of rebuking when they go astray. If SA had done the right thing from the beginning, we might not have been here or stayed this far,” he says, presumably referring to former president Thabo Mbeki’s policy of “quiet diplomacy” towards Zimbabwe in the 2000s, which many believe gave Zanu-PF, Zimbabwe’s ruling party, a free hand to loot the country.

Activist Anthony Muteti says: “The situation has not improved in Zimbabwe. The SA government has not done enough to make … Zanu-PF accountable. They declared the election in Zimbabwe free and fair when people were intimidated and murdered.

“A lot of Zimbabweans are going to come back undocumented … The intensification of security at the border is not going to work; it is a dream, a fantasy. I come from a province close to SA where people used to walk to SA for so many years. Our forefathers have established families; it will go on forever.”

Julius Shamu, a Zimbabwe community leader, says: “As for the claims of Zimbabweans taking jobs from South Africans, I do not agree. How would people working for themselves take jobs from South Africans? How can you tell a person who has been living in the country for more than 10 years to go back to his country without proper planning?”

He says the Helen Suzman Foundation’s challenge to the government’s decision to not renew the ZEP gives Zimbabweans some hope. At least there are people and organisations fighting on their side, he says.

* This article first appeared in GroundUp