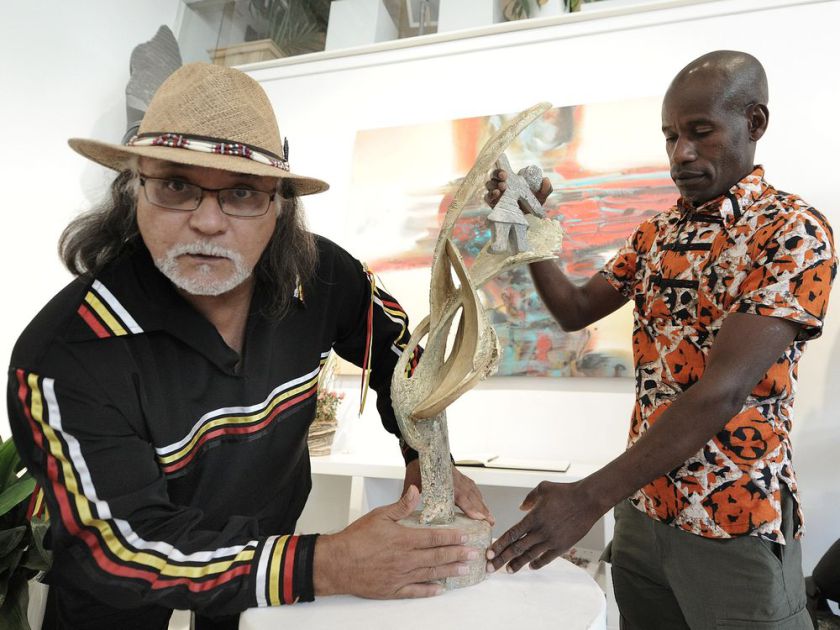 IceBear, an Ojibway artist living on Vancouver Island, and Dominic Benhura, a stone sculptor from Zimbabwe, are collaborating on a piece they call Mother Earth in the Ukama Gallery in Vancouver
Spread This News

CANADA: Two indigenous artists separated by the distance between Canada and Africa have found themselves united over the importance of Mother Earth.

Artists IceBear and Zimbabwe’s Dominic Benhura are collaborating to create one sculpture meant to fuse their respective Ojibway and Shona traditions.

Called Mother Earth, the sculpture rests on a boat resin base shaped like a drum to represent the drumming that is common to both cultures.

The main vertical section features a tree-like form with branches made from lightweight liquid plastic. It is growing upwards from aki — the earth — representing the indigenous tradition of IceBear’s ancestors, the Chippewas of Nawash from the Cape Croker Reserve on Bruce Peninsula in Georgian Bay, Ont.

From Zimbabwe, nature is represented by a dancing female figure which will be placed within the branches of the vertical section. It is carved by Benhura out of fruit stone, a light-weight stone.

The two artists started their collaboration digitally and will finish the work at Ukama Gallery on Granville Island by Tuesday, Sept. 25. Until then, they will be at the gallery daily from 11 a.m. to 4 p.m.

IceBear said the work is about balance, the connection between cause and affect, and the role we have to play as part of Mother Earth.

“We rely on her for so many things,” he said at the gallery. “She’s always been giving to us. All that’s required is for us to give a little back.”

IceBear said the sculpture connects two artists who work on different sides of the globe.

“This is an expression from one aboriginal to another aboriginal, reaching across that great water and finding out what is so common and important to us.”

Previously part of the Toronto Artists Workshop and the art department of the Hudson’s Bay Company, IceBear moved to Vancouver in the early 1980s to work as an independent designer. He works out of his studio in Crofton on Vancouver Island.

Benhura is one of the leading artists in a tradition known as Shona stone sculpture.

“Our ancestors used to sculpt using primitive stools,” Benhura said in an interview. “Like in Brazil, where everyone plays soccer, in Zimbabwe, thousands of children are taught to sculpt.”

Zimbabwe is derived from a Shona word which means “big houses of stone.” The country’s name comes from Great Zimbabwe, an ancient city of stone that flourished from the 11th to 15th centuries.

In 1957, Frank McEwen became director of the National Gallery in Harare. He used his international contacts in the art world — he studied art history at the Sorbonne in Paris — to help introduce modern Shona stone sculpture to an international audience.

Janine Vertone opened Ukama Gallery on Granville Island in 2015. It specializes in stone sculptures with a focus on artists from Zimbabwe.

“Ukama” is a Shona word that means the close personal relationships in an extended family.