JUSTICE Minister Ziyambi Ziyambi has accused Zimbabweans of being desperate and failing to comprehend that the branded buckets he donated recently in his constituency carried an educative COVID-19 message.

The minister, who is also MP for Zvimba West, has come under fire after pictures of him donating branded buckets bearing his picture and that of President Emmerson Mnangagwa went viral on social media.

Commentators say the politician should not take advantage of the COVID-19 crisis to carry out political campaigns ahead of the 2023 elections.

However, in an interview with newzimbabwe.com this week, Ziyambi defended the move and said the branded buckets carried messages of hygiene and how to curb the spread of COVID-19.

“Did you read the message on the sticker on the buckets? The message has the State President’s picture and the message is; ‘The President has declared a state of disaster and he announced a lockdown’. It also gives information on what is expected by the President and myself as the MP of that constituency,” Ziyambi said.

“Currently, we are focusing on jingles if you have watched the national television. The sticker is very specific and not for the whole country but for my constituency with specific needs because we do not have TVs and internet services. People in Zvimba West will always get to read the information on the buckets wherever they meet such as shops and water points such as boreholes.” 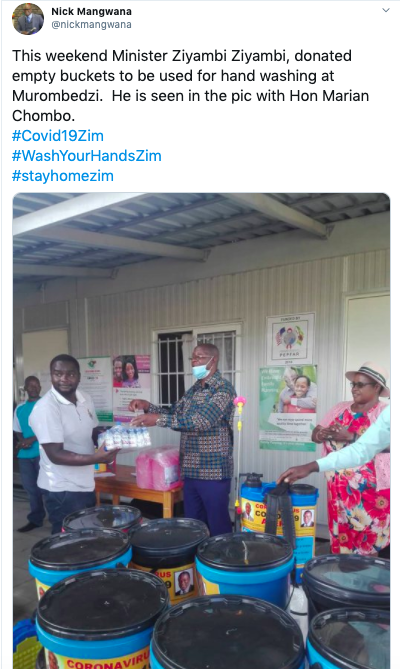 He also dismissed as untrue, allegations that he used $175 000 from the Constituency Development Fund (CDF) on the branding of the buckets.

“I used my personal money. Now they are saying it is Zimplats money. The message left me in stitches, I could not believe it.

“I am surprised that nobody wrote a story on MDC produced buckets which they actually branded with their party logo. I did not even put a Zanu PF logo on the buckets. No one decided to screen that but when it is Zanu PF, people start to comment negatively.

“Zimbabweans should not be so desperate and abuse social media in castigating issues of development as the government scales up information dissemination on COVID-19,” he said.